The Big Announcement: How will you tell everyone? 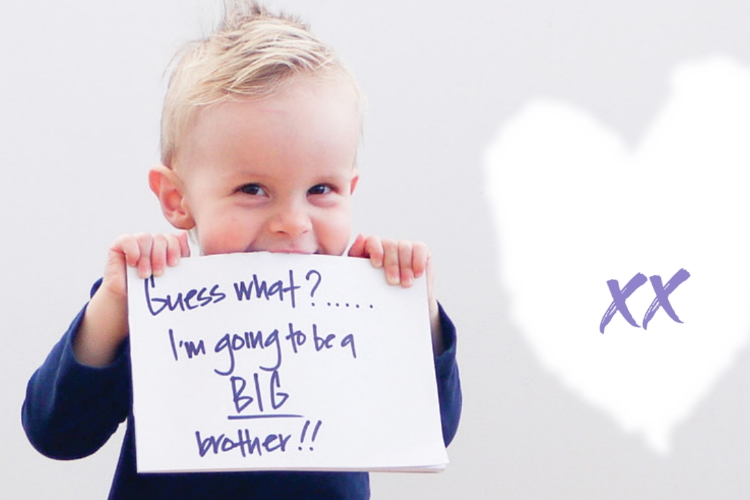 Sarah Tennant looks at how modern families make the momentous announcement of an impending arrival.

If there’s one thing this generation is good at, it’s sharing. And since we can’t eat a meal without Instagramming it, or read an interesting article without tweeting it, it’s not surprising that telling actual news, namely, “We’re going to have a baby!” is more of a song and dance than it used to be.

Then again, most people have only a few babies, and the creation of a new life is legitimately momentous. So why not have fun with it?

When to tell
The best way to tell introverts from extroverts is to observe their behaviour during pregnancy. Extroverts post pictures of a barely-dry home pregnancy test on Facebook, while introverts layer scarves over coats and claim to have the flu for the first four months.

There are good arguments for either position. Telling immediately has one great advantage — it’s often the hardest trimester and the news alerts people to the fact you might need babysitters, home-cooked meals and help with the housekeeping. Also, it can be hard keeping pregnancy a secret from co-workers and close friends if you’re throwing up every 10 minutes. Plus, telling soon avoids having to stumble over explanations as to why you’re not drinking alcohol or can’t commit to being a bridesmaid eight months from now.

The typical argument in favour of waiting is a rather depressing one — if the worst should happen, a miscarrying woman won’t have to “un-tell” friends and relatives and deal with the inevitable flood of sympathy, tactless comments and emotions. Some women compromise by telling only those people they’d talk to about a miscarriage in any case.

The standard time for a delayed announcement is 12 or 13 weeks, when the greatest risk of miscarriage has passed and many women are beginning to show, in any case. Some orthodox Jewish women, however, wait until the fifth month and some Amish women never tell at all!

Ways to tell
A simple search online reveals more announcement ideas than you can shake a pregnancy stick test at. Here are some you might like to consider:

These seem to work best when a photo of Big Sister wearing the shirt is used as the announcement. In real life, most families don’t notice what T-shirt you’re wearing unless prompted! Other T-shirts include “Does this baby make me look fat?” and “Only Child: Expires [Due Date]”.

An ultrasound image is worth a thousand words. Present the picture in a photo frame, stick it at the front of a blank baby scrapbook or cut it into a jigsaw to be assembled. Just don’t be surprised if your dad doesn’t have a clue what it is.

Mymms.com allows you to personalise M&Ms. Some couples choose blue and pink M&Ms with “Boy?” and “Girl?” written on them and some get them printed with the due date. Either way, handing them around at a family gathering can be fun, as long as you don’t expect everyone to get the message immediately. If that seems too subtle, kiwicakes.co.nz sells cookie cutters shaped like bibs, prams and onesies. Cookies sent to your friends should get a good reaction, no matter what they think of babies.

Another popular method is to gather everyone together for a photograph. Instead of “say cheese!” have the photographer yell, “Say [Mum’s name] is pregnant!” before snapping the shot. There are hilarious examples of this online. Another cute option is to tell older children first and snap their reaction, then use that shot as the pregnancy announcement.

From pregnantchicken.com: “I sent a balloon bouquet to [my husband] at work and the card read, ‘We’re going to need a bigger car.’”

Sometimes the parents switch roles: Dad cradles a beach ball, cushion or his own ample tummy, with the caption “Guess Who’s Pregnant?”

Others hand out Chinese fortune cookies “predicting” the baby’s arrival.

Cracked Designs on etsy.com has a number of quirky announcement cards. I love the Russian nesting dolls. The mother doll flips up to reveal a baby inside. Designs include a tandem bike followed by a trike, and a retro “bun in the oven” card.

Morphthing.com allows you to morph two faces together. Morph baby photos of you and your partner, then show off the resulting hybrid with the question, “I wonder if our baby will look like this?” (Morphing photos of your grown-up selves may also be fun, but it’s more disturbing.)

Announcement etiquette
In general, it’s a good idea to let the co-baby-maker know before anyone else. After that, things can get political. If you have an engagement under your belt, you should have a pretty good idea which of your friends and relatives get offended if they’re told after someone else, by someone else or on Facebook.

When telling is hard
Unsupportive family and friends can suck the joy out of a new pregnancy. In an ideal world, no one would respond to the news of a pregnancy with “Again?” or “Well, don’t gain as much weight this time”, both of which happened to friends of mine. (I got a muttered, “Master of the bleeding obvious” and an “I thought so, your skin’s been a bit...”, neither of which filled me with bliss.)

This being a non-ideal world, it can be easier to inform naysayers via an email written in a firmly enthusiastic tone. I know women who even added, “Positive responses only please!”

Some women deploy their partners or, better yet, small children to tell the news. Others wait as long as possible or hope that the grapevine will do the job for them. Sometimes there’s no easy answer!

Many women worry about sharing the news with friends suffering infertility or who have had pregnancy losses. Infertility blogger Mrs Green Grass of the Baby-Making Merry-Go-Round blog says this: “Tell them right away (immediately if it’s your best friend or sister)... right before the public announcement is so much better. It takes the shock away.”

Infertile women say they appreciate being told via email or a letter, to give them space to process their conflicting emotions without the pressure to immediately look joyful and congratulatory.

Photography tips
Third-trimester pregnancy photography is an institution now, from the wholesome family-in-the-park shots with crisp white shirts and kids kissing Mum’s belly to the naked swathed-in-drapery shoots that celebrate your inner goddess (in black and white to mask stretch marks).

Announcement photography is a newer trend. It happens early, pre-bump, when Mum still has something decent to wear. If Pinterest is an accurate barometer of these things, announcement shoots tend to be kitschy — lots of kissing, holding up chalkboards and, for some reason, wearing cowboy boots. Common props include “Bump Ahead” and “Under Construction” road signs or writing chalked on walls (“Mum + Dad equals 3”).

YouTube reveals
Filmed pregnancy “reveals” are huge on YouTube. Quite a few hilariously show grandparents puzzling over the meaning of the onesie or “I Love Grandma” bib.

Covert filming can give you a priceless memory, but beware. One mum’s announcement backfired when her kids burst into horrified wails when they learned of their new sibling. (Then again, it got 600,000 views. Silver lining.)

For your classic screaming grandmas and confused fathers-to-be, search “Pregnancy Reveal” in YouTube, but turn down the volume — what excited family members lack in code-deciphering skills they make up for in decibels.

Sarah Tennant lives outside Hamilton in an apple orchard and has two children, Rowan and Miles. This would be an excellent opportunity to make a pregnancy announcement but, alas, she is not expecting.

Photography: Kenny Stuart (and thanks to his son (Big Brother) Micah, merrypad.com