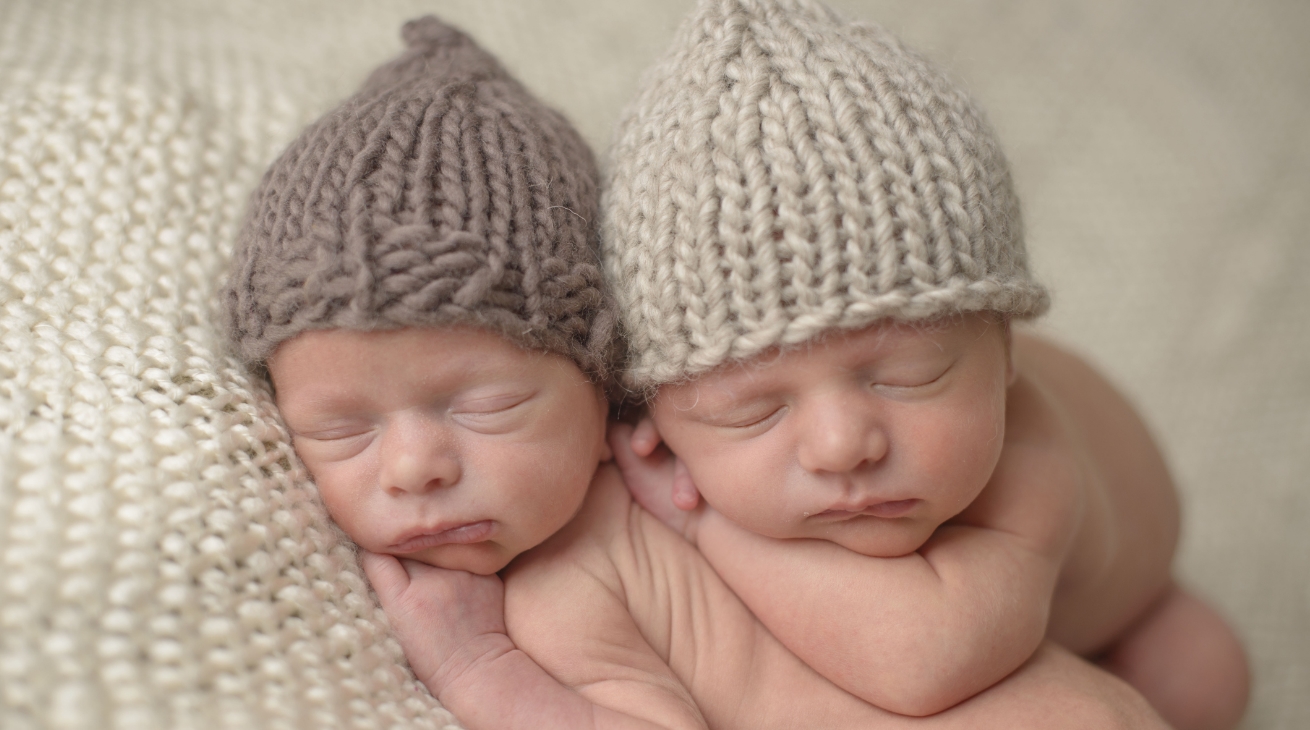 Twice as nice - or double the trouble? Sarah Tennant explores the fascinating facts behind the conception of twins and what causes them. Particularly, hyperovulation.

It's a rare woman who doesn't stop and smile at the sight of twins napping in a pram or toddling about in matching dresses. From Shakespearean comedies to Mary-Kate and Ashley, Romulus and Remus, and the Bobbsey Twins, there's just something about twins which fascinates people. While having dealt with a singleton pregnancy and newborn phase has made me a devout convert to the "one at a time" school of thought, I still find myself drawn in wonder to twin-related pictures and discussions on the internet.

Yet despite the fact that twins are more common and arguably more high-profile than ever, the nitty gritty of twin conception remains a closed book to the public at large. It was only by accident that, while surfing online, I discovered that there is more to twins than the popular question, "Are they identical?" In fact, twin conception is a fascinating, complicated, and sometimes downright wacky phenomenon.

Leaving aside some very unusual circumstances, twinning happens in one of two ways. Either the woman releases two eggs during her cycle rather than one (a process called hyperovulation) and each egg is fertilised by a different sperm, or the woman releases one egg which is fertilised in the normal way and subsequently splits in two. Twins in the former case are known as dizygotic or fraternal twins; in the latter, as monozygotic or identical twins.

Thus far, conceiving monozygotic (one-egg) twins is believed to be completely random, with no genetic component. The worldwide rate is constant at four births per thousand.

Two-egg twins are called "dizygotic", or less commonly "biovular"; the colloquial name "fraternal" is fairly accurate, as it emphasises the fact that such twins are simply siblings who happen to be conceived around the same time. Dizygotic twins account for two-thirds of all twin pregnancies and have the lowest risk of all twin pregnancies, as each baby has its own placenta and sac. Because the babies are fertilised by different sperm, they may be different sexes, have different blood types, and look entirely different - on the other hand, they may look extremely similar, just like any siblings.

One-egg twins are traditionally referred to as "identical", a rather imprecise term which annoys some twins. The technical term is "monozygotic", which can be preferable as it focuses on the twins' biology rather than their looks. After all, "identical" twins are not usually identical! While they do have identical DNA, their genes may express in different ways. These epigenetic differences tend to increase with age due to lifestyle differences and environmental triggers; as a result, twins who looked identical at age six may look markedly dissimilar at 60.

Monozygotic twins have four different categories. This is dependent on how quickly the egg splits post-fertilisation. If this happens between one and three days after the babies are conceived, the split is early enough that each twin develops its own placenta and amniotic sac. Called dichorionic/diamniotic twins (DCDA), these babies tend to have a low risk profile similar to that of dizygotic twins.

When the egg splits between four and eight days after conception, the result is monochorionic/diamniotic (or MCDA) twins. These babies share a placenta, but have separate sacs. MCDA twins are the most common type of monozygotic twins, occurring in 60-70% of instances.

A late split (between eight and 13 days after conception) results in a high-risk form of twin pregnancy known as monochorionic/monoamniotic (MCMA) twins. Sharing both a sac and a placenta, these twins are usually monitored closely in late pregnancy to ensure that their movements do not tangle the umbilical cords around each others' necks.

Both MCDA and MCMA twins are also at risk for twin-to-twin transfusion syndrome (TTTS), a disease of the placenta in which blood is shunted unevenly between the babies via the connecting blood vessels in their shared placenta.

Finally, a very late split (more than 13 days post-conception) can be partial and result in conjoined twins. The term "Siamese twins" refers to a famous pair of Thai conjoined twins, Chang and Eng Bunker, and is not considered appropriate today. Such twins are extremely rare - estimates range from one in 30,000 to one in 200,000. Conjoined twin pregnancies are the riskiest of all, as many conjoined twins have severe disabilities. There are examples of twins being joined in many different ways; the most common include thoracopagus (stomach-to-stomach), pygopagus (back-to-back), craniopagus (head-to-head) and thoraco-omphalopagus (chest-to-chest) twins. Conjoined twins always share at least one organ, and the possibility of separation after birth depends on the degree of interdependency of the babies' organ systems.

How can you tell between fraternal or identical twins

In the case of boy/girl twins, it is generally safe to assume they are not monozygotic! With same-sex twin pairs, it can be harder to tell. Having a single placenta is not a good indication of monozygocity, as the separate placentas of dizygotic twins can fuse during pregnancy. Nor are looks any indication! Case in point: Mary-Kate and Ashley Olsen, so identical as toddlers that they played the same character on TV, are actually fraternal twins.

If twins look alike and have the same blood type, it may not be possible to determine zygosity without a DNA test. Many twins are quite happy not knowing what "kind" they are. However, knowing zygosity can be useful in situations requiring organ or blood donation.

But if you know the mother was hyperovulating, then you can guarantee the twins are fraternal.

In technical terms, in a normal ovulation cycle, follicle stimulating hormone (FSH) is released and a number of follicles develop. Over time, the follicles die off and only one survives, and this grows and develops. It releases estradiol, which triggers luteinizing hormone (LH) which then causes ovulation. When an egg is released during ovulation and then fertilised, a pregnancy starts.

In hyperovulation, there are a few differences from normal ovulation.

Women with higher FSH levels have a higher rate of fraternal twins. Because hyperovulation causes multiple follicle development, it can pave the way for multiple births. While there are other factors and there’s no direct causation (hyperovulation does not cause twins in itself) it does increase the likelihood.

There are some symptoms and risk factors that make multiple ovulation more likely. Hyperovulation mostly occurs when the menstrual cycle is changing in some way, either amping up or winding down.

What are the chances of Hyperovulation?

A 2006 study found that around 21% of women had at least one cycle out of three when hyperovulation occurred. While the figures can’t be precise, that gives an idea of general prevalence. Being on Clovid or Letrozole increase the likelihood of hyperovulation.

There have been environmental causes discovered, linked to hormones. Worldwide, the highest rate of twins happens in the Yoruba tribe of West Africa. This has been attributed to a chemical in the tribe's staple food - yams.

Fraternal twins are also more common for women who are taller than average, heavier than average, or who have had several previous children. And, of course, hyperovulation is often deliberately caused by stimulating the ovaries with fertility drugs such as clomiphene.

There is no way to definitely tell if you are hyperovulating other than an ultrasound. There may be slightly more discharge than usual, or a slightly longer ovulation period, but there’s no definitive signs of hyperovulating.

There’s also no way to tell if you’re hyperovulation using ovulation test kits; yes, they tell you that you are ovulating, but not how many eggs or follicles are available during the process.

Unless you take prescribed medications such as Clovid or Letrozole, there’s no way to make yourself hyperovulate. However, there are some things you can try that science may not be able to fully prove yet, but if there’s no risk to your health, why not?

Hyperovulation foods include cassava, a wild African yam that in NZ we might know as manioc or tapioca. It’s high in oestrogens and phytoestrogens and it’s said to increase the likelihood of hyperovulation. There are no herbs that cause hyperovulation, and no guarantees that what you take will be safe unless prescribed by a doctor and approved by governing bodies.

A number of studies have shown that women who eat meat and dairy products have twins at five times the rate vegan women do. There’s a suggestion that this may be due to growth hormones used in farming animals.

If by this point you're thoroughly confused, don't worry. I asked a friend of mine the other day whether her twins were MCMA, MCDA, or DCDA, and her eyes stared into middle distance for some time before she replied, "They shared a... Hey kids, we have to go. It was a... Don't hit your brother. They both had a... Hang on. Was it a placen... no, that's not your jacket. What were you asking?"

"Never mind," I said and wandered off with my singleton baby, feeling the familiar sense of awe and fearful respect that comes from being around mothers of twins. But I couldn't help glancing over my shoulder... Awwww. Twins. Sarah Tennant lives in Hamilton with her husband Dominic and her daughter Rowan.

If you're still confused about chorionicity and zygosity, or want to know more about TTTS, visit the pregnancy section of this website. There's even a week-by-week pregnancy guide for mums-to-be expecting multiples.