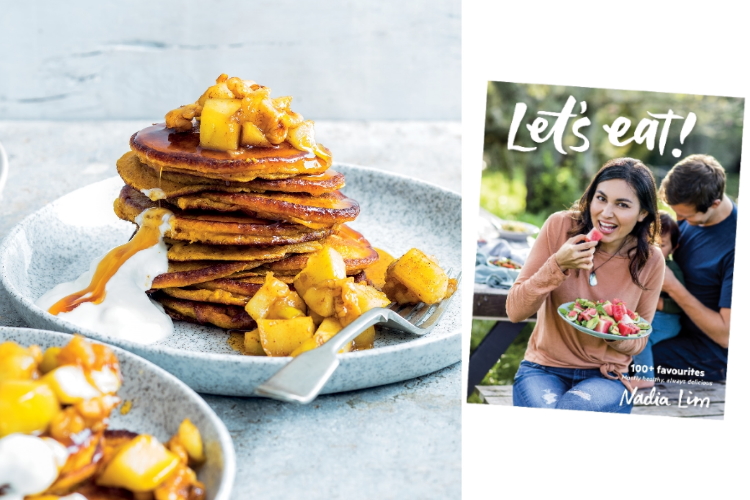 I ate these in a café once and thought the inclusion of pumpkin was genius; I had to try recreating the recipe as soon as I got home. These are light and fluffy, with the perfect amount of warming spice. I’ve thrown a banana in for extra sweetness, which also results in the edges of the pancakes becoming a little caramelised and crispy as they cook.

TO SERVE
Yoghurt (dairy or coconut)

1. Preheat oven to 50°C . Place pumpkin, banana, eggs, milk, vanilla, salt and sugar in a blender and blend until smooth and there are no lumps.

2. Sift flour, baking powder and spices into a large mixing bowl. Make a well in the centre and pour in pumpkin mixture. Whisk together until a smooth, uniform batter forms.

3. Heat about 2 teaspoons of coconut oil or butter in a large non-stick fry pan on medium heat. Pour half ladlesful of pancake batter into the fry pan. Cook for about 2 minutes on one side until little bubbles start to appear on the surface, then carefully flip with a fish slice and cook for about 2 minutes on the other side, or until pancakes are golden brown and just cooked through. You should be able to cook about three at a time. Keep pancakes warm on a plate in the oven while you cook the remaining batter.

5. To serve, stack a few pancakes on each plate and top with apple and walnuts. Serve with yoghurt and a drizzle of maple syrup.

TIP
⭐ To cook pumpkin or butternut, toss 600–700g (peeled and chopped) with a drizzle of oil and maple syrup on an oven tray lined with baking paper. Roast at 180°C for 40–45 minutes or until soft and slightly caramelised.