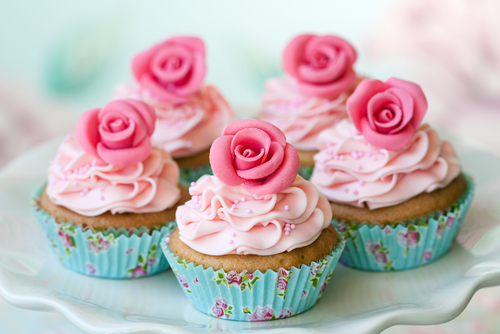 Step 2
Beat butter, essence and sugar in a bowl with an electric mixer until light and fluffy.

Step 3
Add eggs, beating well after adding each of them.

Step 4
Add flour and milk and beat till well mixed. Then using a spoon put the mixture into cases.

Step 5
Cook in a moderate oven, 180 degrees C, for about 15 minutes, or until cooked when tested. Place cakes onto a wire rack and wait for them to cool down, before icing.

Beat butter and vanilla essence in a bowl with an electric mixer until pale. Gradually beat in half the icing sugar, then the milk and remaining icing sugar.

Add food colouring to colour the icing - you may want to separate scoops of icing to mix different colours for topings.

Mix a small portion of blue icing and put half blue on one side of the cupcake and white on the other side. In the blue area place a fish (jelly or chocolate) so that the fish is swimming in the sea, and place a yellow people in the white sky for the sun.

Stick jubes on top in all sorts of fun shapes and figures.

Sprinkly hundreds of thousands on the top.

Cut the top layer of the cup cake off and cut it in half. Ad cream to the base then position the two halves in the shape of wings on top to make butterfly cakes.