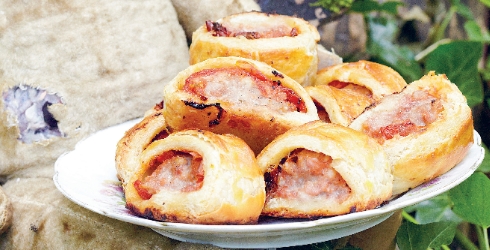 There is nothing quite like a good old sausage roll. Every children’s party I have ever been to included sausage rolls. In fact, many an adult party, too. Though they can seem a little retro, sausage rolls are making a comeback along with all those other '70s dishes we thought were too uncool a few years ago. There are so many ways you can change a plain sausage and pastry roll. This recipe uses juicy squished tomatoes, but you could try a spread of wholegrain mustard or red onion marmalade, both of which are just as scrummy.

Preheat the oven to 140°C (275°F) Gas 1.
Cut the tomatoes in half, top to bottom, and scoop out and discard the seeds. Lay the tomato cups, cut side up, in a large roasting pan. Season well with salt, and pepper, sprinkle over the sugar and herbs, and drizzle with olive oil. Bake in the preheated oven for around one and a half to two hours. Leave the tomatoes to cool, then blitz to a purée in a food processor.

Remove the skins from the sausages and put the meat in a mixing bowl. Season well with salt and pepper, knead with your hands and put to one side.

Divide the pastry into two equal portions and, on a lightly floured surface, roll out each portion to a rectangle measuring about 32 x 10cm.

Spread the squished tomato purée over the sheets of pastry leaving a 5cm border around the edge. Lie a portion of rolled sausage meat along the long edge of each pastry sheet and gently roll up. When there is 2cm or so left to roll, brush a stroke of beaten egg along the inside lip of the pastry before finishing rolling up and sealing the edges. Cut each roll up into eight smaller rolls and lie them, seal-side down, on the prepared baking sheet. Brush the rolls with the egg, pop in the preheated oven and bake for 15 minutes until puffed up and golden brown.