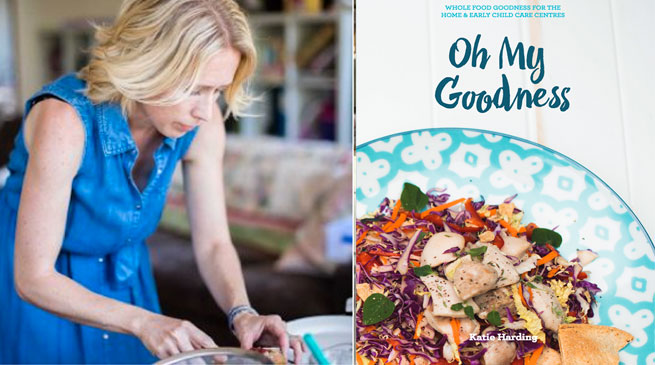 Nutritionist Katie Harding is on a mission to improve early childhood nutrition.

When nutritionist and naturopath Katie Harding took up a job as cook in her daughter’s childcare centre, she was shocked at what the kids were being fed: pasta, chicken nuggets, sausage rolls and sweet cakes.

The mum-of-two made some drastic changes to the menu, introducing wholefoods, deconstructing dishes like salads so kids could choose what to eat, and including more fruit and vegetables. (click here for Katie’s popular fruit and oat slice recipe). The change in the kids’ behaviour was amazing, she says.

They were calmer and happier and best of all, really liked the food. In fact, the biggest resistance was from some of the staff who didn’t believe the kids would take to the new menu.

“People’s food beliefs start in childhood, and some of the staff were holding on to theirs, and weren’t so willing to try something new,” says Katie.

Through her company Nourished Beginnings, Katie is working with New Zealand’s Little Wonders Childcare to overhaul their menu and create an entirely wholefood offering for its children. Her just-released book Oh My Goodness is filled with recipes for childcare centres of 50-100, but they’re also family friendly.

Katie prefers ingredients and foods as close to their natural state as possible, such as wholemeal flour, butter, coconut sugar and honey, and lots of fruit and veggies!

“Because kids are spending a lot of time at daycare these days, about 80%-90% of their dietry requirements are provided by that daycare,” Katie says.

“So, as parents we need to be questioning what our childcarers are feeding our kids, and daycare centres need to think about how they can provide the best nutrition [for their kids].”

Preparing a dinner at the end of the day can often be a big deal for busy parents, says Katie, but if they know their child has been eating well at daycare there’s not so much pressure - something simple like a boiled egg on toast will suffice.