Eyecare For The Under Fives 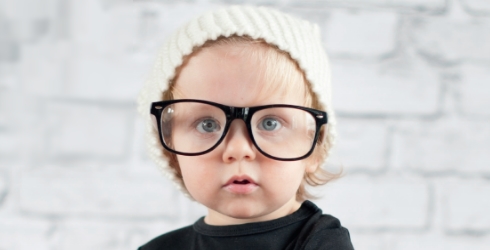 Vision problems in children are more common than you may expect. Optometrist Melissa Hay explains why we shouldn’t over-look eyecare in our under-fives.

As someone who has suffered from myopia (short-sightedness) since childhood, I can empathise with children who have vision problems. I spent my teenage years in and out of my local optometrist’s having my eyes tested and new glasses prescribed. But despite the best efforts of my optometrist, my eyesight continued to deteriorate.

However, as they say, every cloud has a silver lining and for me that was being inspired to pursue a career in optometry.

In my youth, there weren’t as many options for treating children with vision problems. But as in most areas of life, technology and research have increased the range of treatment options and improved the quality of care for children.

Many parents are surprised to discover that it is relatively common for children to have difficulty with their sight. In New Zealand, Plunket does a great job of looking after babies’ general health, including their eyes. But I would recommend parents take their children to an optometrist around the age of four and certainly before they start school.

Research shows 80% of a child’s learning is done visually, so it’s really important that any vision issues your child may have are identified before he starts school.

In New Zealand all four-year-olds are eligible for a B4 School Check which includes a vision test. But this is a quick screening test that does not pick up all the possible vision problems.

A routine eye examination for a child takes about 30 minutes and checks co-ordination, tracking, colour vision, whether he needs glasses and, most importantly, the health of his eyes. The examination will cost around $50, or is free with a Community Services Card. Some children will be eligible for a subsidised eye examination, frames and lenses through Enable New Zealand.

Short-sightedness
Short-sightedness is where near objects can be seen clearly, but objects in the distance appear blurry. The condition occurs when the eyeball is slightly longer than usual from front to back, causing light rays to focus at a point in front of the retina, rather than directly on its surface.

Myopia often begins in childhood and as a result many children may not be aware they have a problem with their vision as they are not able to compare their vision with anyone else’s. As myopia is related to the size of the eyeball, the condition may continue to worsen as the child grows.

Long-sightedness
Long-sightedness causes near objects to appear blurry. The condition is most often the result of the eyeball being smaller than normal. Because of this, when the eye is fully relaxed vision is focused some distance behind the back of the eye (retina) and vision is blurred.

Since the size of an eye is the main factor governing focus, and as eyes continue to grow until about age 25, the condition can improve as a child grows. Despite this though, some people remain hyperopic throughout life.

Astigmatism
Astigmatism, a condition that often becomes apparent in childhood, is a focusing error of the eyes which causes blurriness. It is caused by the shape of the eye, usually due to the cornea’s surface or occasionally due to the eye’s lens being tilted. Often astigmatism eyes are described as being rugby ball-shaped. This means that the retina does not get a clear image and the eye has to struggle to see. Sometimes astigmatism can be inherited but it often happens as a normal characteristic of growth. The condition is often mistaken for a learning difficulty in children as it causes them to have difficulty focusing and concentrating.

Amblyopia
Amblyopia, or lazy eye, is the loss of one eye’s ability to see details. It is the most common cause of vision problems in children, affecting approximately two or three out of every 100 children. The only way to diagnose amblyopia is with an eye examination, but some of the tell-tale signs include eyes that turn inwards and/or outwards, or do not appear to work together. Other signs are an inability to judge depth correctly and poor vision.

The condition occurs because the abnormal eye sends a blurred or incorrect image to the brain. This confuses the brain and the brain may learn to ignore the image from the weaker eye. Up until age eight the brain is developing the connections from the eye. If there is a lazy eye, then the connections don’t get developed and the eye stays lazy for life.

Strabismus
Strabismus, more commonly known as “crossed eye” or “turned eye”, is a disorder in which the two eyes do not line up in the same direction and therefore do not look at the same object at the same time. This causes children to use only the better eye in order to avoid double-vision and this is how a lazy eye can develop. It is essential that any eye crossings are looked at by a professional as soon as you notice them.

Glasses are the most common treatment option for managing short-sightedness. They offer the patient versatility, in that they can be worn all the time or just for distance tasks, such as seeing the whiteboard at school.

Any parent will appreciate that it can be difficult to get a child to wear glasses, however these days glasses are specifically made to fit a child’s face and there is a wide range of colours and styles to choose from.

Children should have their eyes tested annually, but if they have glasses, lenses will likely only need to be changed every two years.

Contact lenses are an option for older children, usually we suggest for children over the age of 12. Contact lenses come in many forms, with the most common being dailies or monthly replacement.

Only in extreme cases would surgery be recommended to correct a child’s vision.

Orthokeratology
Ortho-K is a non-surgical procedure that allows the patient to have accurate vision without having to wear glasses or contact lenses during the day. It works by gently remolding the cornea – the front surface of the eye – using a specially designed lens worn at night while sleeping. Ortho-K is generally available to children older than 11 years, but in certain cases it may be appropriate for younger children.

The procedure does not involve needles or cutting of the tissue, which is often involved in alternative treatments and can be a major deterrent or inhibitor for children.

I am a fan of ortho-K, because, had it been available 20 years ago, it would likely have made a considerable difference to my eye sight.

Research has shown ortho-K can slow or even stop the degeneration of eye sight in children suffering from short-sightedness, as well as removing the need for them to wear glasses or contact lenses during the day.

Such is the significant potential of ortho-K for younger patients whose eyesight has yet to considerably deteriorate, I have decided to focus on the 11-25 year old age group at my practice.

A recent study undertaken in New Zealand found that a third of parents questioned, with children aged five or older, had never taken their children to have an eye examination. Given that most people would consider vision to be their most precious sense, I urge you to look after the eyes of your beloved youngsters.

Melissa Hay, BOptom (Hons), CAA Accredited, Ocular Certificate in Pharmacology, is an optometrist and business owner who sits on the board of directors of Visique, New Zealand’s largest optometry co-operative. For the past seven years she has owned and operated Visique Milford on Auckland’s North Shore. Melissa also mentors young optometry students and regularly speaks to interest groups in her community about vision and eye health.