Home > Under 5 > Health and well-being > Living with food allergies: one mother’s story 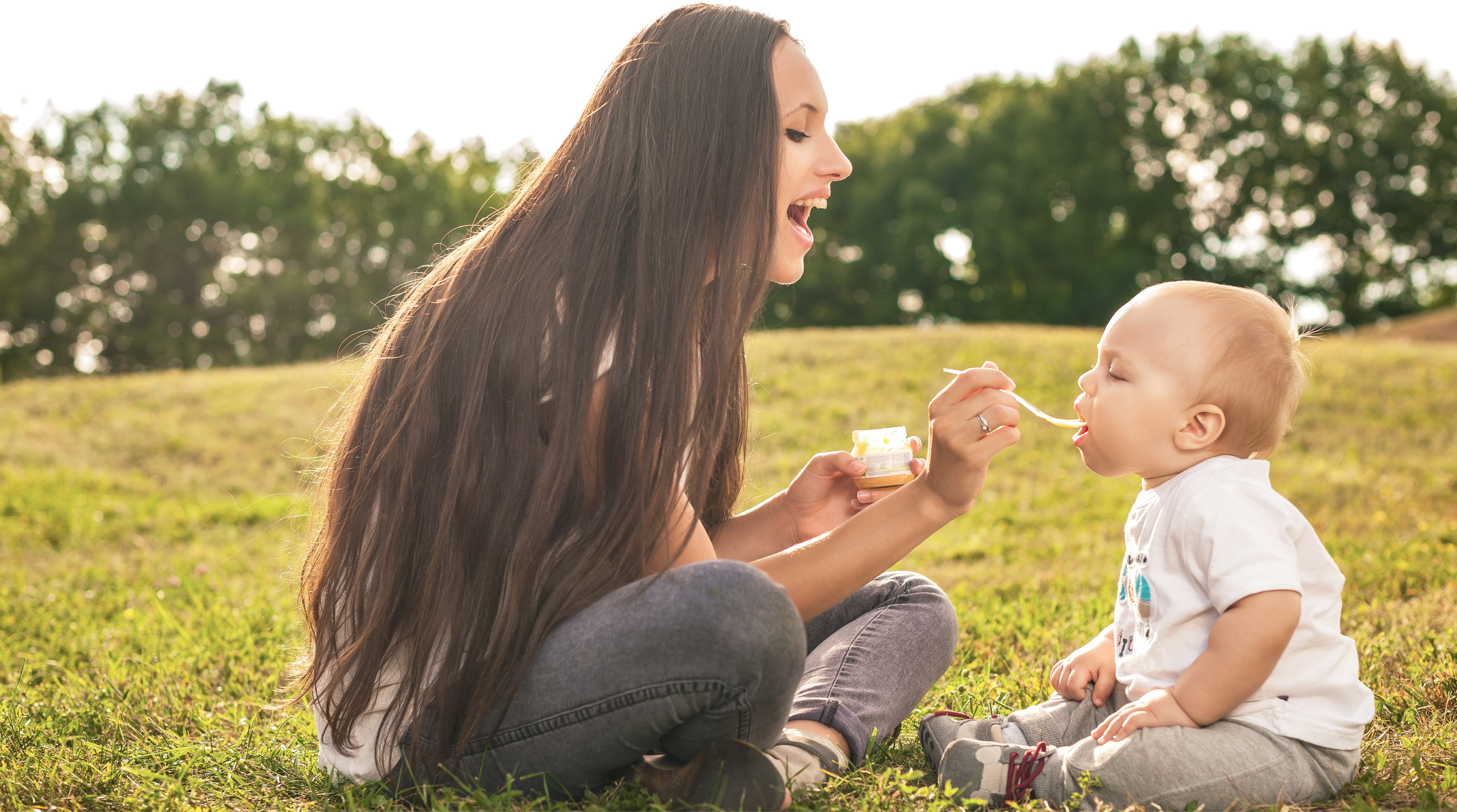 When everyday foods pose life-threatening risks, cafes and birthday parties come with a side order of caution, explains Melissa Zgomba

We discovered that our son had a severe food allergy. As a first-time mum introducing my son the hard way to new foods, I never imagined that allergies would become a major factor in our life. Neither my husband nor I have allergies, and although I was taking the cautious approach to the introduction of solids – carefully trying one new food at a time – I didn’t seriously think there would be an issue.

When my son Zack was eight months old, I was excited to give him his first taste of yoghurt. He took just two teaspoons before he started to get upset. Initially I thought he just needed a nap, but mother’s intuition told me that something wasn’t right. I then noticed that his face was turning red and puffy, hives were appearing, his nose started pouring and his mouth drooled saliva. I screamed out to my husband and we rushed our baby to hospital. Once there, Zack’s breathing became raspy and we were told that he was having an anaphylactic reaction. The swarm of medical staff quickly administered medication to stop the reaction, while we sat there feeling helpless.

Once his breathing had settled and symptoms subsided, we were transferred to the children’s ward. By the time we left the hospital, after the standard six-hour observation time, Zack was back to normal. The blood test results to confirm the allergy were going to take a few weeks. In the meantime, we had lessons on how to administer adrenalin using a syringe and we practised on a teddy. This was the temporary solution until his allergies were known. I was terrified that if Zack had another reaction, I wouldn’t know how to use the adrenaline in the heat of the moment. The blood test confirmed that he was indeed allergic to cows’ milk protein and eggs too, which we hadn’t even tried yet. This was a milestone we weren’t quite expecting – our son was now dairy- and egg-free.

Just a sip
Initial adjustments to Zack's diet weren’t too difficult, since he ate mainly meat, vegetables and fruit. He had no issue with breastmilk, which was a relief, and later he was prescribed Neocate, a dairy-free formula. This formula is completely funded, unlike the Epipen which cost $170. The cost was, of course, worth the peace of mind, knowing we could quickly give him adrenalin without fussing around with a syringe. It was also much easier for babysitters.

We’ve only had to use the Epipen once, when Zack was accidentally given a regular milk fluffy instead of a soy one. On every other occasion I have taken the first sip to check that it is soy. However, on this occasion I didn’t because we were regulars at this café and the manager even reminded the barista that Zack was allergic to milk as she was preparing the drinks. This gave me a false sense of confidence. Zack took a few sips and passionately told me how disgusting it was before leaving the room. This reaction wasn’t normal for him so I took a sip and upon realising that it was dairy, I ran off to find him. The poor boy had started vomiting and complaining that he couldn’t breathe. This all happened within minutes. We gave him the adrenalin and called the ambulance. It took eight months for Zack to try another fluffy and I will never again make the mistake of not tasting it first.

Snack watch
Finding interesting snacks was a huge challenge. I had to read the back of every packet and I’m still on the lookout for new ‘safe’ foods that are suitable for lunchboxes or snacking on the go. I’m often surprised by what has dairy in it, and what doesn’t. On the bright side, my son has a very healthy diet because he can’t have the biscuits and treats many other kids can. I would watch Zack like a hawk when we were at playdates with other kids, in case he decided to have a nibble on someone else’s food or take a drink from their bottle of milk. Thankfully he’s never shown interest in what others are eating or drinking, so we soon learnt to relax a little, whilst still keeping a watchful eye.

Going to cafés and restaurants is always a challenge. I am ‘that mum’ who asks what is in things, and reminds the staff repeatedly that my child has allergies so please, please be careful. Often the only thing Zack can have in a café is hot chips. Not exactly the healthy choice, but what can you do when there is nothing else? I was also really nervous about highchairs, which often had food scraps and smears all over them. I preferred to have him on my knee at the table. We don’t go out for dinner as a family much, because of the lack of menu options for Zack. He’s not a very adventurous eater, so getting him to try something new, even though it is safe for him, is next to impossible.

Big wide world
As Zack got older we had new challenges, like birthday parties and kindergarten. Thankfully he is very good at communicating what his allergies are. His kindy teachers are amazingly supportive and even arranged for a community nurse to show them how to use an Epipen. This helped put my mind at ease, knowing that the staff would keep a watchful eye. Zack even asks me to pack his own spoon for his kiwifruit so he doesn't need to use the kindy spoons used for yoghurt! Birthday parties make me the most nervous; mainly as to how my son will feel not being able to eat what the other kids are eating. I always pack him his own safe party food, and a decorated cupcake to have at cake time. However, it is still hard for him to not be eating the same as everyone else. Even when there are safe food items for him, there is the risk of cross-contamination from other foods, whether it is from chocolate-covered hands reaching into the popcorn, or cheerios being piled onto a plate with pizza. To reduce the risk, I speak to the parent to find out what is in the food items, and I’m usually the first at the table to prepare a plate for Zack. I then try to subtly hover to keep a watchful eye, without being too much of a helicopter mum. It’s important that Zack doesn’t feel my anxiety. I want him to be careful, but not fearful. The last thing I want is for him to develop a food phobia.

Recently we’ve been to parties where the parents have carefully catered for Zack’s allergies and even asked me for my cake recipe. I don’t expect others to cater for us, but I truly appreciate it when they do. Zack’s own parties are a breeze because I’m now well-practised at catering to his allergies and know all the best ‘safe’ party food.

With my son turning five recently, we faced the biggest challenge yet – keeping him safe at school. I discovered allergypharmacy.co.nz, a great website selling tools to communicate a child’s allergy, such as badges and bracelets. I bought a strap with a face plate that has the medic alert symbol engraved on it. To kids it looks like a watch, but if Zack had a reaction, his allergies would be obvious to an adult. We bought another Epipen to leave at the school office. For safety reasons, we don’t leave Zack's Epipen in his bag in case another child plays with it. I’m still anxious (I think I always will be) but I know he will be watched and I have confidence in his own awareness. We’ve tried to educate Zack about his allergies, without making them define him, and I’m incredibly proud of how he copes.

Food allergies are a challenge, but there is more awareness now and food packaging has better labelling. People are also more understanding. These days I get less eye-rolls from people who think we’re just doing a fad diet! I’ve found a fantastic cookbook, The New Zealand Food Allergy Cookbook, which has great recipes with easy-to-find ingredients. I’m more confident with adapting recipes. Sometimes it is as easy as replacing butter with Olivani, and milk with rice milk or soy, but occasionally it doesn’t work. I use an egg replacer, but I prefer to just find an egg-free recipe. Zack’s favourite takeaway is Subway and the staff are good at changing knives and gloves before making Zack’s sandwich.

It was nerve-wracking starting our second child on solids. I was tempted to camp out at the café across the road from the hospital for her first taste of yoghurt, but I decided I was just being silly. Thankfully she is allergy-free!

And the question I get asked the most: "Will Zack grow out of it?". Doctors initially told us that by age five he should have outgrown his allergies, alas his blood tests are still positive. I do still hope the day will come. In the meantime, I will continue my mission to find the tastiest, most nutritious dairy- and egg-free foods available. Good thing I like baking!

Melissa Zgomba lives in Wellington with her husband and their two children. She works part-time as the PR manager for Mountain Buggy Osteopathy: hands-on help for your newborn

Switch off your autopilot and live in the moment

Time to top up? The benefits of toddler milk

How to: make your video clips worth watching How to connect with your parenting village Hello and goodbye: farewelling a parent while raising a young family