Reasons for kids to wear sunglasses 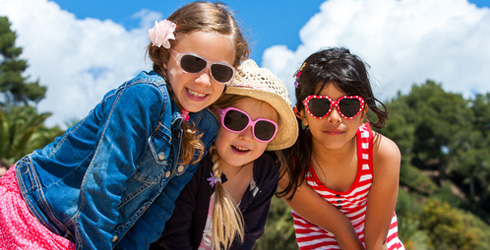 Most of us know sunglasses are not just worn to make us look good (and hide our tired eyes), they also protect against sun damage. The same is true for children, only more so.

In fact, 80% of sun damage to eyes is done before you turn 20, according to worldwide studies completed in the past three years.

Children can spend many hours in the sun and they have larger pupils that let in more light, and therefore the potential for damage.

And hats don’t quite cut the mustard as far as protecting eyes from “horizontal light”, says Visique optometrist Melissa Hay.

But you won’t need to spend a fortune to get decent shades for the kids. Pretty much all sunglasses sold in New Zealand (barring super cheap ones from $2 shops) block the damaging UVA and UVB light.

Of course, once you’ve got them the glasses, the next job is to persuade the kids to wear them.

The best way is to make sure you wear them yourself (along with your hat), says Melissa.

You may also want to let your children choose the style (within reason, of course).

It’s just important to get kids into the habit of sunnies and hats as early as possible, says Melissa.

She says eye problems caused by the sun include cataracts later in life and the common condition, pterygium, which is an unsightly red eye condition that sounds good to avoid!