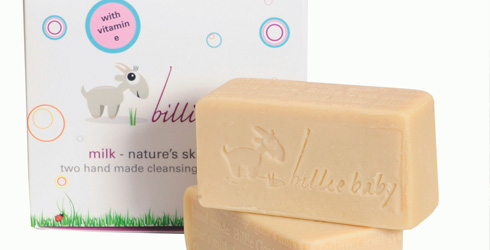 Goat's milk soap may be the cure for eczema and sensitive skin.

Eczema is the cause of many sleepless nights and misery for many families but it can be a particularly tough nut to crack.

Steroids is the standard medical response while some people have good results from ruling out wheat, dairy, sugar or other foods.

Australian mum Leanne Faulkner was in that boat in the early 1990s. Her four-year-old son Liam had severe eczema and none of the traditional treatments worked. Leanne began her own research online and discovered goat's milk soap was said to be help eczema.

That was a break-through, especially as the family did have a dairy goat as a hobby. She began making soap. Although the first tries were "terrible" she persevered and finally made a soap that helped his irritated skin.

Goat's milk contains lactic acid which helps exfoliate the skin and encourage cell rejuvenation. It's also high in selenium, an anti-oxidant for the skin, and it's naturally gentle.

New Zealand, like Australia, has a high incidence of eczema, particularly among the young. At least one in six children will have the condition, most of them diagnosed before the age of five.

Back in the '90s, demand for Leanne's soap began to grow as news of its benefits for eczema spread. In 1994 she launched Billie Goat Soap and by the time she sold it to cosmetics and skincare giant Heat Group a year ago it was in 1800 stores.

The full range, including soap, bath milk, foot soak and moisturisers, was launched in New Zealand late last year. Most products sell for between $12 and $20.

Gillian Franklin, managing director of Heat, says, "With over one million people suffering from eczema in New Zealand (according to Allergy NZ) we are confident that the Billie Goat Soap range will be popular and successful throughout the country."

The company says it uses only fresh goat's milk, rather than powdered, for a more effective product.