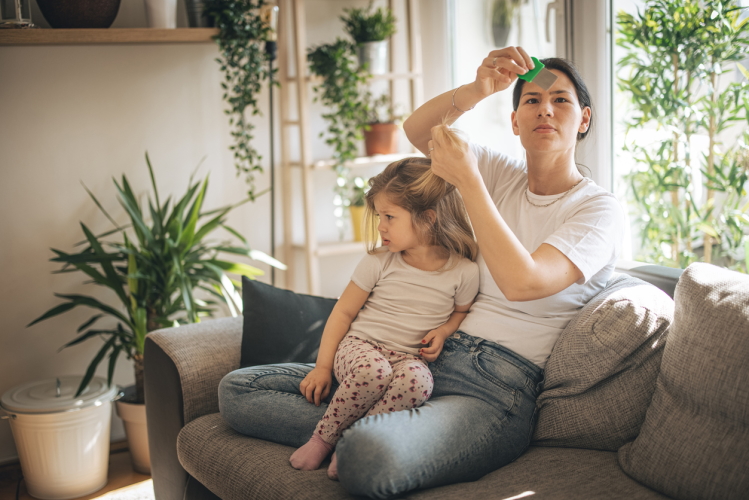 The text books call them pediculosis capitis. Most people call them head lice, or nits. Some kids call them cooties, but that makes them sound cute, and they’re not cute at all. They’re currently an epidemic here in New Zealand, as they are in many western countries, and disturbingly they’re becoming increasingly resistant to many synthetic pesticides. Pippa Henderson takes a look at the facts and shares some advice – because when it comes to head lice we could all do with a few more weapons of warfare.

I don’t know how our family managed to stay safe for so long, but our children reached the ages of eight, six and three before we had to deal with a head lice infestation. Infestation. It’s a strong word, but rightly so, they’re a big problem. Head lice don’t simply invade your house, they try to gain squatting rights on your childrens’ heads. They are also the thieves of time, unapologetically claiming giant unscheduled chunks of parents’ most precious commodity, right at the most un-opportune moments. I was trying to write a book for my master’s degree when they hit our family (and local community) in force. No matter how much treating and combing I did the nit count kept increasing – seemingly faster than my word count! No one likes the feeling that they’re fighting a losing battle. Eventually we claimed the victory, but that’s not to say they haven’t taken up residency again since. The good news is that these days I’m more efficient in fighting them, and part of this comes down to knowing the facts.

One. Head lice are parasitic insects. They need three things to survive: a human scalp, a constant supply of food, and 75% humidity.

Two. Lice make no distinction between gender, race or socio-economic group. Their impartiality is the only thing I like about them. They cannot read the decile on your local school. We’re all vulnerable – even adults. (Although, to be honest I’ve never heard of a head lice infestation rest home. Perhaps we’ll add ageism to their list of wrongs.)

Three. They inhabit both clean and dirty hair.

Four. Lice cannot jump or fly. They transfer with head contact or shared headgear. They cannot swim, but do remain on the scalp after swimming, bathing and showering.

Five. Lice cannot survive off the head for more than 24 hours – the books tell us. But I’ve heard about a mother who put one in a jar as an experiment, and it was still alive two weeks later! Call this urban myth if you like, but either way, this fact goes to show how important it is to add washing sheets and pillowcases to the process of de-infestation.

Six. They multiply like rabbits. Actually, even faster than rabbits. An egg takes 7-10 days to hatch, and it takes another 7-10 days for a louse to mature and lay eggs of their own.

Seven. You can tell the difference between un-hatched and hatched eggs. Un-hatched eggs are light brown through to dark brown in colour. Hatched dry shells turn white as they dry and become more visible. This can lead us to believe the infestation has worsened, but that is not necessarily the case. Unless these white shells are removed, (which usually involves a lot of patience and the use of fingernails) they can remain on the hair shaft for as long as six months and are carried down as the hair grows.

One. Go to the doctor and getting a prescription for the treatment, especially if things are a bit tight financially. Treatment shampoos are usually over $20 a bottle, and you may be going through a lot of them.

Two. Make regular thorough inspections. A quick check behind the ears is not enough. Sometimes you can’t see any evidence of infestation on your child, but when you get a nit comb through they’re actually riddled. If you see your kid scratching, do not delay in treating them. They are the masters of exponential growth. Sometimes their ability to multiply seems nothing short of miraculous.

Three. Visit your hairdresser. One quick and simple for solution is to cut your child’s hair really short. All well and good for boys, but obviously not such an appealing option for girls! It is at least worth considering a good few inches off the bottom of longer hair though, as it will save you time when you’re combing. But before entering a salon it’s important to be aware that many salons have a policy not to treat anyone with head lice. From personal experience this is an embarrassing thing to discover mid cut.

Four. Be aware that products involving a follow up treatment seven to ten days later demand this because they do not kill the eggs as well. From personal experience if you wait a whole seven days between treating again the infestation can be back at its original level. In an ideal world you’re looking for a one off treatment that kills the eggs as well. Ask your pharmacist for help with this.

Five. Comb, comb and comb again. We recommend progressing down through a range of combs in increasing fineness, so you’re not struggling with knotted hair as well. Do this until you no longer find anything. One staff member is not confident that the treatment shampoo does anything other than make her feel like she’s trying to deal with it – it seems to her that combing them out is the only solution. Another staff member recommends the Robi Comb, especially for children with finer hair. These work by releasing an electrical discharge, which kills the head lice on contact. They cost about $60, which may sound like a lot, but you’ve got to remember your time is also valuable.

Six. Do what you can to reduce the risk of a re-infestation. Keep your child’s hair tied up and consider some form of repellant. The Crown Jewels (TCJ) sell a range of hair care products and treatments that use 100% natural actives Neem & Quassia, meaning they’re safe for regular use. In terms of repellants they sell a spray on (and leave on) three in one treatment/preventative/leave-in conditioner. They also sell TCJ Neem Hair Styling Paste, which I have used on my boys and it has seemed to be an effective preventative. The bonus with this one is that there were no complaints as it smelt nice and they thought it was solely for styling. If your budget is already stretched, a good covering of hairspray may help deter them. Obviously a hat is the ultimate preventative measure, but it’s unrealistic to expect a child to keep one on, and it’s dangerous when kids start sharing them. Perhaps those pioneer women with their bonnets had multiple reasons for wearing them!

Seven. Keep an ear out for fresh ideas. One of our staffers heard in the school playground (some my say by word of mouth…) that green Listerine was an effective way to eradicate them. So she bought some and transferred it into a spray bottle, applied it to her child’s hair, and then wrapped her hair in Gladwrap. After twenty minutes or so the head lice were all dead. Now, it wouldn’t be fair to say that the child did not then need any follow up treatment, but in the grand scheme of nit treatments, she was pleased with the result.

This pharmacist pointed out that parents often willing to accept the risks of the chemical treatments just to be rid of them, but she's a fan of natural products, which are oil based or cream based. Her recommendation would be Botanica MR NITS head lice treatment – “a special formulation of natural botanical oils which disrupts the attachment of lice and their live eggs to the hair, enabling quick and easy removal by rinsing and combing.”

She commented that when it comes to treating head lice it’s not effective to look for convenience, and suggested attacking the problem with more than one method. For example use your chosen treatment shampoo, but after you’ve done so load on plenty of cheap really thick conditioner and leave it for a few minutes (as this can suffocate the lice), and when the hair is dry also use a hair straightener.

She also pointed out that with a lot of the treatments it’s not that they’re necessarily ineffective, it’s just that head lice really easy to re-catch. All you need to do is miss an egg.

I asked her for her thoughts on the parents out there improvising with green Listerene. She said she hadn’t heard of that method, but that Listerene is alcohol based, so it’s likely to irritate the scalp.

“The most effective preventative is tea tree oil. Mix one teaspoon of concentrated tea tree oil with a natural shampoo and a little olive oil, and spray it on monthly.” This pharmacist said that a common treatment in his home country in the Middle East when he was a child was Kerosene – but that he didn’t recommend it.

I asked him for his thoughts about the green Listerene treatment currently doing the rounds. “Not the right treatment,” he said. “Not dangerous, but not approved.”

To tie it all up…

Obviously treating your child is not up there on the list of parents greatest joys, but if you look you can find some positives. Combing head lice out of your child’s hair isn't exactly quality time, but it is quantity time, and time is time nonetheless. Try to make the most of it. Engage your child in conversation, and have a few laughs along the way. You’re on the same team, united in battle against your small yet prolific enemy. Teach them that knowledge is power; share what you know about head lice and their habits. Teach them that some things in life do need going over with a fine tooth comb...and when you come out the other side into a lice-free home, make sure you celebrate the win!