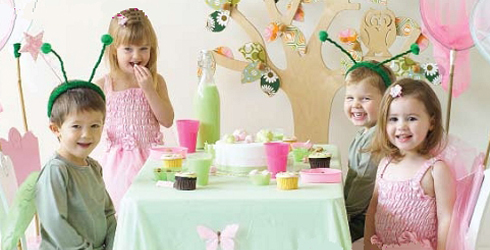 I'm all for kids feeling special on their special days. And a birthday is pretty much the only day that is all about you (unless your mother was inconsiderate enough to give birth to twins, as I was). But I'm not sure that birthday parties achieve the desired result. There is an astonishing amount of unmentionable one-upmanship around these formulaic celebrations. Trendy decorations? PC guest list? Allergen-free or sugar-loaded finger-food (depending on which extreme you're aiming for)? Where's the fun in that?
Parents can get way too strung out with how the cake's going to turn out and whether the carpet looks good enough to eat. And kids at birthday parties seem to be either too young to parallel-play or too sugared-up to re

member how to share. Compound this with more pressure to Have Fun than on a family holiday, and you've got a recipe for disaster.
And seriously. Birthday parties. For one-year-olds. I ask you! Of course it's a milestone, of course it's worth a massive celebration, but at least be clear that it's for you and not for the birthday boy or girl. At any rate, their so-called friends are likely to be the offspring of your own friends or coffee-group compatriots. Who won't be able to comment on the cake or purposefully unwrap the presents - although, chances are, if they do get hold of the wrapping paper, they will enjoy it much more than the gift within.
Would that it were always thus. As our kids grow, so do their understanding and expectations of birthday parties. Case in point: The four-year-old who arrived at a two-year-old's birthday, demanding, straight off, "Where's the party bags, then?"
I was horrified. I was already on the back foot, though, having turned up in the wrong outfit (again) - party clothes instead of jeans and a black top. I compounded that by playing on the floor with the kids (come on, there was finger paint and everything!) instead of sitting with the mums and drinking chardonnay. One thing I did seem to get right, according to the just-turned-two-year-old, was the present. Apple! Apple! I'd wrapped one in several layers of crinkly foil, bubble wrap and string. The birthday boy tore, crumbled, popped, ripped, and crunched the coverings,before greeting, eating, rolling, and throwing the contents. That gift got a lot more recognition and attention than a fair bit of plastic junk he received that day. Oh, and it only cost 30 cents, along with some time and recycled wrapping.
And, that, for me, serves as a metaphor for birthday parties in general. If you're going to have them, there's got to be something good and solid underneath the shiny paper. Otherwise the point gets lost in the debates over plastic party bags versus paper bags your kids have decorated versus those new eco-friendly cloth keepsake party bags.
Let's take these bags and unpack them a bit.
#1. The plastic party bag.
This is just too easy. Buy them in bulk from any cut-price shop, fill them with rubbish toys that will break in mere minutes, cost next to nothing and were probably made by someone not too much older and taller than your two-year-old who is paid a pittance and couldn't afford to buy such plastic trash even if she wanted to. And we all know Plastic Bags Are Bad.
#2. The do-it-yourself brown paper party bag.
This one gets the big tick for involving your kids in the party preparations. But even this can cause angst for little kids. Not just in having to share a packet of lollies around (a valuable lesson) between a bunch of bags, but also in choosing which bag is for whom and having to stick by the decision. For kids, who live so much in the present, it seems really reasonable to change their mind about who gets what, and who should be invited,  every five seconds, anyway.
#3. The eco-friendly cloth party bag.
I hate to point it out, but people discard party bags ruthlessly, regardless of whether they are sustainably made. You're still buying a perfectly unnecessary product, possibly because party bags are the "done" thing. Buying an eco-friendly party bag just salves your green conscience as well as silencing the latent parental guilt we all carry. But there is another way...
#4. The no party bag party.
Solution #4 isn't necessarily fashionable during party season round our way, but if it means you have more time to spend with your kids, more money to spend on lasting gifts or memories, or just less slavish adherence to the party line, then I'm all for it. A birthday can be celebrated in the park, on a picnic, in the pool. You don't need a tired formula to prop that up. We don't have to tell our kids that's the only way.
I'm totally in favour of honouring our kids' birthdays; I just think that our zeal for proving we're good parents has got in the way of shared time and meaningful celebrations. Balloons? Hooray! Cake? All over the place. Fairy bread? Love it. But all the party bag bits and bells can go whistle while I sit down and join in the celebrations.

Liz Breslin is a freelance writer based in Hawea Flat, New Zealand. Her short stories, poetry and articles, including a series of opinion pieces called "Mum's the Word", have been published in New Zealand and abroad. She has also written a play called Losing Faith: A Tale of PND, exploring the issues of postnatal depression through the constraints of coffee group culture, which she is hoping to stage this year. Happy birthday parties
by Laura Williamson
I was once the Grinch of children's birthday parties. I mocked them. To me, they were indulgent parental acts of one-upmanship from which kids emerge dazed, clutching loot bags, their bellies distended from gorging on seven-tier fairy-castle cake. Then my son Liam came along, and so did his birthdays. By the time he turned three, I was shamelessly baking Thomas the Tank Engine cupcake trains and Googling party-theme ideas. What happened?
For one thing, Liam's birthdays made me nostalgic for the celebrations of my youth. My best birthday ever was my seventh. I got to invite 10 friends and my parents rented - and hauled up two fights of stairs - a flm projector with a screen so we could watch movies. This was before VCRs, DVDs and TV On Demand (yes, I'm that old), and seeing a film at home was a rare treat. I don't remember what we watched, who was there, or even what presents I got. But I do remember how I felt: Special.
And special is what a birthday party should be. We only get to celebrate about a dozen of them as children. By the age of 13, it's all over. Musical chairs and pass the parcel are sidelined by the secretive boy-girl rituals of adolescence. By 25, birthdays become something to be ignored; by 45, dreaded. So why not have as much fun as we can while it lasts?
Frankly, there are a few party trends these days which are decidedly un-fun. Case in point: Liam and I recently went to a bash at which, instead of a lolly scramble, there was a raisin toss and all the bowls on the table were filled with rice crackers and dried apricots. The cake was low-sugar carrot cake and the only thing to drink was water. Noble, yes. Healthy, yes. Fun, no.
I actually like carrot cake. But there is no place at a birthday party for a dessert made out of vegetables. I know, junk food is bad for you, we're in the throes of an obesity crisis, and blue icing lowers your child's IQ. But can't kids have one day a year when they're allowed to make themselves sick by chugging fizzy drink, overdosing on MSG, and stuffng their faces with radioactive pink marshmallows?
Of course, some parties are over the top. Expensive birthday celebrations are an old tradition in Western culture. During Victorian times, wealthy families used children's parties to showcase their affluence, giving ornate gifts to everyone, including the servants. And parents still do it. Suri Cruise's second birthday was rumoured to have cost $100,000. That's a lot of party hats. (For the record, the most expensive birthday party in history was the Sultan of Brunei's 50th. He hired Michael Jackson to perform and blew more than $27 million in one night.)
While there is no need to take out a second mortgage to show your little nipper a good time, why not go a little crazy on his or her special day? Kiwi parents are a low-key lot, and, unlike the Cruise-Holmes clan, we don't like to show off. But if there's a time to exorcise you inner-Scrooge, surely it's on your son's or daughter's birthday.
Go on: Decorate your lounge like the inside of a pirate ship. Hide gold chocolate coins all over the neighbourhood and devise an elaborate treasure map with riddles, clues and GPS coordinates. Rent a Captain Hook costume and make a fool of yourself. Buy the Muppets Treasure Island soundtrack and have a singalong.
Sure it's a little indulgent, but sometimes indulgence is part of making your child feel special. What happens at their own birthdays matters to kids. It's a way for them to feel special in front of their peers. That's why they'll have the preschooler equivalent of a chat-around-the-water-cooler on a Monday after a weekend party.  "I had a Thomas the Tank Engine cupcake-train at my party. It was awesome! What kind of cake did you have?"
This, then, is the point. Part of what makes birthdays cool is getting stuff you wouldn't normally get. Part of what makes them memorable is that they are the one day a year when you, no matter who you are, get to be the most important person in the room. Part of what makes them fun is breaking the rules a little.
I want Liam's birthdays to stand out. I'll keep renting bouncy castles, baking cakes shaped like motorised vehicles, and overstuffng loot bags. Why not? Birthdays are rare. It's worth it.