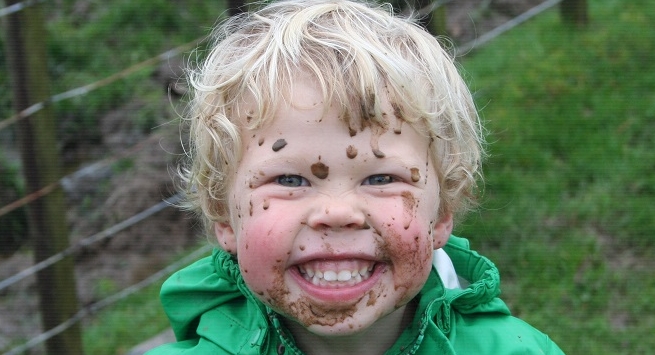 Nature invites us to come outside and play and, as Catherine Tafto explains, it’s an invitation worth accepting –whatever the weather.

Lukas is scared and he doesn’t want to do it. Cassandra gently tells him that here, at Outdoor Explorers, they have a saying – “Feel the fear and do it anyway”. He thinks about it and still says "no", and wanders off to play on the crazy swing. After a while he comes back. He really wants to get down to the river where some children are eeling. I tell him if he wants to get down there, he has to go this way. I offer to go first, “I will be right behind you. I won’t let you fall”. Finally this is good enough for him, and my four-year-old son abseils down the bank.

We live in a country with amazing outdoor resources but are we actually taking our children outside to spend time exploring in nature? And should we be?

It is easy to find research on other countries (particularly the US and the UK) which seems to consistently tell a story of children missing out on the freedom to play that their parents benefited from. New Zealand-based research for preschoolers is harder to find, but a 2009 study showed levels of physical activity in both boys and girls declined between ages three and five.

I have vivid childhood memories of exploring in winter, the excitement of standing at the top of a hill in the howling wind, making mudslides and then heading home for a bath and a warming cup of Milo.

Town mouse, country mouse
Anecdotally there seems to be a rural/urban divide, and talking to friends in both town and country, it is easy to see why. Nicky’s four-year-old twin girls Katherine and Courtney spend a lot of time outside, exploring with Mum, swimming in the river, and helping Dad on the farm – year round. “It is just a part of being a country kid; you put on the rain gear and gumboots and if they get wet and cold you put them straight in the bath when they come in.”

Contrast that with Sarah, living in town. “The children spend a lot of time outside playing in our backyard, rain or shine, but actually taking them further afield to get into real nature is a bit more challenging – so it hardly ever happens.” The logistics of getting everyone stripped and changed and dry and warm and then into the car are just a bit much sometimes.

So is it a case of having a fair weather relationship with nature? You'd be hard pressed to find many New Zealand families who don’t spend time outdoors, at the beach, for example, in summer. So maybe the problem is as simple as not having the right clothes for the colder, wetter months.

My first son was born in Norway. In Scandinavia, it is a case of “No bad weather, just bad clothes”, and children in kindergarten go outside every day. I remember looking out the window at the sleet one day and deciding I wouldn’t go for a run, it was just too cold. Not five minutes later some kindy kids toddled past my window, two by two, a little pack of colourful Michelin minis. In Norway, most kindergartens take regular excursions to the woods, where they cook lunch over a fire and explore. Out for a stroll, one would find little groups of kids all over the place, including the Natur Barnehagen (Nature Kindergarten) which had a permanent hut in the forest with a potbelly stove and reindeer skins on the floor.

You would expect that, in New Zealand, rural children would have better outdoor gear, but Lucy from Puddle Jumpers, a children’s outdoor clothing supplier in Marlborough, surprises me by saying that her customers are an even 50/50 split between urban and rural. She also says they are supplying more and more preschools and kindergartens as they set up outdoor programmes.

Let nature be their teacher
In New Zealand, there is a revival in the early childhood education sector in purposefully connecting children with nature. This is why Lukas and I joined Tuakau Kindergarten’s Outdoor Explorers for a day.

Three years ago, Tuakau Kindergarten teachers, Diana and Cassandra, attended a conference where they were inspired by an outdoor programme being run by a kindergarten in Te Anau. A year of fundraising and a mountain of paperwork later, the Outdoor Explorers programme began by taking out ten children once a week for four hours at a time, soon after adding another day for ten more children.

We meet the two teachers, ten children and two parent helpers (essential to maintain the right ratio) in a local carpark and head off to the bush, stopping on the way to play on a fallen tree. Dianne tells me that the parent helpers know not to tell the children to be careful or hurry up – everything is child-led. When we reach the edge of the bush, the group pauses to take in the surroundings. They note that Ta-whirimatea (god of weather) is gentle today and discuss whether they can hear Tangaroa (god of the sea) or not. They say a prayer of thanks to Papatu-a-nuku (the land), sing a waiata, and we enter the bush.

First is morning tea. Under the trees there is a double circle of wood rounds –a little one to sit on and a bigger one for a table. In the centre of the circle are the remnants of a fire –usually they cook their lunch but right now there is a fire ban in place. During morning tea the teachers go over the rules; there aren’t many and the children understand they are to keep them safe and look after the bush.

After morning tea the teachers ask the children which way they want to go and the exploring begins, which is when Lukas finds himself abseiling and taking part in a spot of catch-and-release eeling.

The programme has been running for two years now, with no injuries and no days off for bad weather. The feedback from parents has been overwhelmingly positive with some parents enrolling their children in the kindy because of its outdoor focus. Local primary schools have also expressed interest in running similar programmes.

Naturally beneficial
The benefits to children of spending regular time playing outside in nature are compelling. Here are some of the advantages proven by research:

● Children score higher on tests of concentration and self-discipline.
●They show more advanced motor fitness (including coordination, balance, and agility)and they are sick less often.
●Their cognitive development is improved by increasing their awareness, reasoning, observational skills, and creativity.
● Their play is more diverse and shows a higher prevalence of imaginative and creative play, fostering language and collaborative skills.
● Their sense of wonder is enhanced, which is an important motivator for life-long learning, as well as a sense of peace and being at one with the world.
● Symptoms of children with Attention Deficit Disorder are relieved after contact with nature.

Play in outdoor environments stimulates all aspects of child development more readily than time spent indoors. The research around risk-taking is also worth a mention. If we don’t allow children to freely take appropriate risks, they are not able to practise risk-assessment. At one end of the scale, this can lead to children becoming reluctant to take any risks. At the other end, they may take inappropriate risks or have difficulty reading situations. When children are given a chance to explore and adventure freely, they quickly learn their own abilities and to trust their instincts.

OFF YOU GO THEN
Here are some ideas to get your family out of the house, no matter the weather.
● Get some good wet weather gear for you and your children – jacket, pants and gumboots – but also have old clothes you don't mind getting dirty.
● Find the best places to go in your area so you have a mental list ready. We are truly spoilt for access to nature in New Zealand and even if you live in an apartment in downtown Auckland you have some great options within a 10 minute drive.
● Make a plan so it runs smoothly (who are we kidding, as smoothly as possible when there are little people involved) – pack towels, plastic bags, water for rinsing off, and at least one full set of clean, dry clothes.
● If you’re having trouble making it happen, schedule a regular nature adventure once a week, fortnight, or month – whatever suits you – and stick to it, regardless of the weather.
● Snacks, snacks and more snacks. A thermos with some Milo and a sweet treat will quickly warm cold littlies and be a special part of the adventure. I still fondly remember drinking out of my grandmother’s aluminium picnic cups and can visualise the leather case they came in.
● Find some nature buddies to share the adventure with, both for you and your children –just don’t mix your coffee thermos with the Milo one.
● No excuses. Cabin fever is ugly. Fresh air is a tonic for the soul and hits everyone’s refresh button. Children jumping in puddles and climbing fallen trees are far too busy to whine or bicker.
● Don’t underestimate your children. The same child that whines about walking up a hill on the footpath will suddenly be capable of more than you realise when there is adventure afoot.
● On the same note, be realistic and get ready to recognise the warning signs as kids can tire more quickly in wet and windy play.
● Relax and have fun – nature and fresh air are good for grown ups too.

Catherine Tafto loves having outdoor adventures with her three boys, especially in wild weather, but has to bite her tongue to stop herself saying “be careful” the whole time.