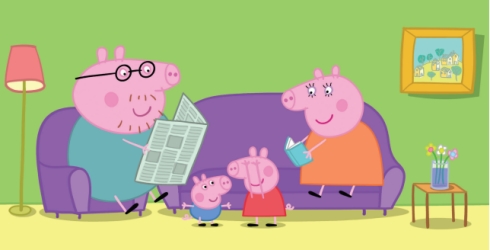 Meet the fun-loving fellows behind the ever-popular Peppa Pig.

If you’ve ever watched Peppa Pig— and international viewer figures suggest you probably have — you’ll have noticed the kids’ style cartoon drawings, simple story lines and a childish delight in snorting and jumping in muddy puddles.

No wonder kids love it. But it’s also a reflection of the people who make it, because animators are quite childish, says one of Peppa’s creators, Mark Baker. If you visit Peppa Pig HQ, the Elf Factory, you’ll find the animators’ desks are covered with toys.

Peppa’s creators (including Neville Astley and Phil Davies) are three ageing Brits who like a bit of a laugh but are totally serious about making completely original preschooler TV. And it’s paid off big time. The trio must be well on the way to becoming gazillionaires now — in 2010, the Peppa Pig brand grossed more than $400 million in UK merchandise sales alone.

Mark, Neville and Phil met in the animation department of an English polytech in the 1980s. Mark also at one stage worked alongside Nick Park, famed creator of Wallace and Gromit and Shaun the Sheep. Whether it was the Nick Park influence or their own maverick personalities, the trio were determined to avoid the set formulas commonly found in children’s television.

They began making Peppa Pig in 1999 and found a home for it with Nick Jr, where it began airing in 2004. Peppa is a feisty four year old who was inspired by that naughty little penguin Pingu, says Mark. But like Pingu, when Peppa’s naughty, she has to learn a lesson from it.

It’s at the Elf Factory in London where they gather to think up plot lines. Often, they go in with absolutely no idea of what to write, says Mark. Then one of them starts talking about the building work going on at his place and another mentions the latest funny thing one of his kids has done and suddenly another five-minute episode of the hit series is born.

Peppa banned
In some homes though, Peppa is banned from children’s television screens by mums who think she’s a bad influence. Peppa can be a bit rude, and often to her parents. On top of that, her little brother George once refused to eat his vegies.

Mark thinks this parental reaction is over the top as 95% of the time Peppa is not naughty.

“Often it’s taken completely out of context,” he says. And anyway, the father of one adds, “This is meant to be observational, based on what we see in our lives or other people’s lives.”

So far the studio has produced four series of Peppa Pig — that’s 208 episodes — and even though an episode airs for just five minutes, each one takes a lot of hard work. Writing alone takes a week and a half.

“People are amazed by how long it takes, which makes you feel very guilty, or lazy and slow,” says Mark.

But while Peppa is now worth millions to its makers —- it airs in 180 countries — there’s been little time for enjoying the fruits of success. Partly this is because three years after Peppa first aired, along came Ben and Holly — two little fairy folk looking for adventure.

Ben and Holly’s Little Kingdom has longer storylines and more sophisticated plots but it retains the delightful humour that appeals to adults as well as children. It also stars the tricksy Nanny Plum who is cast in a fairy godmother role.

Coming up, the trio is set to move away from kids’ TV and into grown-up films. And goodness knows what they’ll come up with once they venture into the adult realm.