My toddler’s first sentence was so, um, practical! 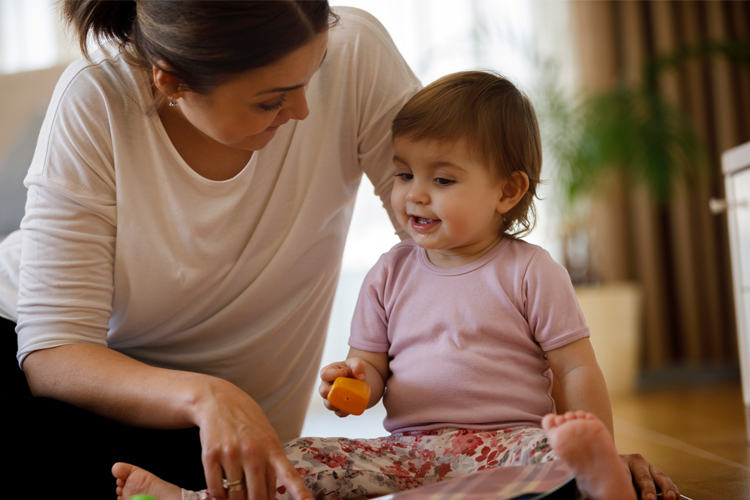 Fiona Roberton describes her expectations of her daughter's first words - and the reality.

I can’t remember exactly what my daughter’s first word was, but I do remember the first time she put two words together. I felt a mix of excitement at her new found ability to combine words – and slight disappointment at what she’d chosen to say. She sat in her high chair, looked directly at me, and then out it came: “more peas”. It was followed not long after by, “more chick-en”.

Perhaps I was disappointed by the fact that, after all of the effort of caring for her in the first two years of her life – keeping her alive, fed, warm and safe – she’d not taken the opportunity of using her first sentence to say something nice to me. “Love you,” would have been wonderful, although I’d have happily settled for a “thank you”. Even a, “yes Mum,” would have made me smile. No, for a long while (or so it seemed) Kate’s first word combinations were based entirely on food requests.

So I reflected, and thought, “well, I’m the parent here, I can have some influence.” The next day I taught her how to say, “I love you”. I said it to her a few times and asked her to repeat it, which she did, and then I smiled – a lot – so she said it again. And that was all there was to it really, until the following afternoon and completely unprompted she said it. And even though I knew I’d taught her to say it, my heart melted all the same.

Now the word combinations have stepped up a level, and we’re getting up to five words at once. The first time this happened Kate was once again at the high chair (there’s clearly a food theme here), and said, “this watermelon is really yummy”. Gosh, I was very happy with that! Not only had she used five words, it was also quite appreciative. “Yes it is yummy watermelon,” I replied.

She was later having a nappy change, and I was talking to her about her reusable nappies. Out came, “the pink nappy is dirty,” followed by, “the purple nappy is clean.” I thought that was quite amazing and I clearly had a future poet laureate on my hands. Plus, it was nice to have moved on from talking about food all the time.

As my daughter’s language journey progresses, I’m looking forward to hearing her describe more and more what she’s thinking and feeling. Sometimes I hear her saying things to herself that I’ve said to her, and I smile. A recent one is, “well done Kate,” when she uses the potty, climbs the ladder to the slide unassisted or eats her Weetbix nicely. She looks at me, says, “well done Kate,” with a big smile on her face and claps her hands. One day she’ll realise that people don’t actually say this to themselves and she’ll stop. That’ll be a shame because who doesn’t need a burst of positivity in their lives? Seems our children can really teach us parents something.

Fiona Roberton is a mum of one.