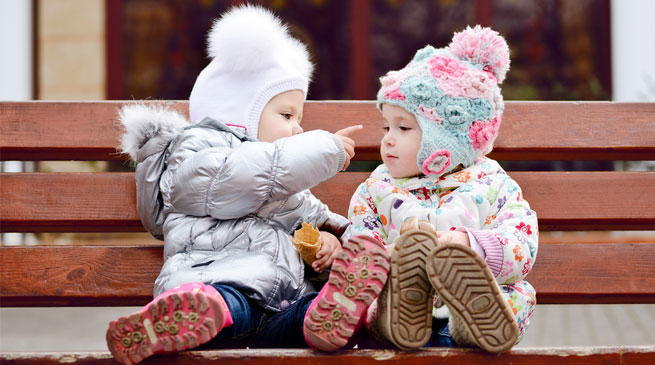 THE STAGES OF PLAY
Your child's social development cannot be broken down into neat, tidy stages like his/her physical milestones, rather it is a progressive milestone, one which takes time to evolve rather than simply being "achieved" at a given age or time. One of the most important aspects of his or her social development is the way in which he or she plays. Developmental psychologists identify two stages of play: parallel and interactive, which occur as your child grows through the toddler and preschool years.

PARALLEL PLAY
Young children engage in parallel play: that is, when you put a group of children together, they will play alongside each other, perhaps even working on the same activities. However, they are not actually playing TOGETHER, rather they are simply playing parallel to each other, with the activities of those around them having little to no impact on their own individual play.

INTERACTIVE PLAY
From around the age of two years, your child might begin to show an awareness of what those around him or her are doing, and might want to become involved in a particular game or activity with another child/children. This is very much a process, and how early/late your child begins this process depends on a number of factors including *his/her own personality type: if your child tends towards being shy or quiet, he will likely take longer to enter the interactive play stage as he/she will be quite content with his/her own activity. Conversely, children who are more outgoing by nature may show an earlier interest in interactive play.
*exposure to other children: children who are in daycare settings surrounded by other children from an early age tend to enter the interactive play stage sooner than those who spend less time around other children. Similarly, twins and higher order multiples engage in interactive play much earlier than singletons, some as early as 12-15 months. Experts are divided as to whether this nature or nurture - is it a part of the mythical "twin bond", or is it simply because there is always someone else around to play with so they develop a heightened sense of social awareness?

TYPES OF PLAY
As well as the stages of play, there are several different types of play which experts agree are important for child development. These types of play engage your child's senses in different ways and encourage him/her to explore and question the world around them.

MESSY PLAY
Even the youngest toddlers enjoy messy play, and every child should have the opportunity to get a bit grubby every now and then! Some examples of messy play include finger painting and experimenting with different combinations of soap powder, food coloring and water. Messy play experiences provide a tactile experience whereby all of the enjoyment is in your child's sense of touch.

WATER PLAY
Kids love water, and it's another important play activity. Water play encourages the scientific areas of your child's brain: think depth perception, pouring games, experimenting with adding coloring to the water… Always make sure you supervise your child/ren around water though, as children can drown in a very short time in a very small amount of water.

CONSTRUCTIVE PLAY
There are so many different possibilities with constructive play: blocks, building in the sandpit, collage and cardboard construction. Constructive play encourages your child to experiment by building higher towers, digging deeper holes etc., all of which is giving him or her the opportunity to challenge his or her perception of what they can achieve.

FANTASY/IMAGINATIVE PLAY
This is by far one of the most important types of play, and persists long after the preschool years into your child's school days. In it's most primitive form, it can be as simple as your toddler trying to dress him/herself in someone else's clothes, or playing with dress up clothes; as your child gets older it extends to teddy bear tea parties, pretending to be a monster or dragon, role playing with baby dolls… the possibilities are quite literally limitless!

For some ideas on great ways to encourage your child's play, check out the OHbaby! Lifestyle section, you'll find 50+ Free Toddler Boredom Busters plus tips for indoor and outdoor play, recipes for play dough and finger paint, and tips for cooking with kids, to try with your child…